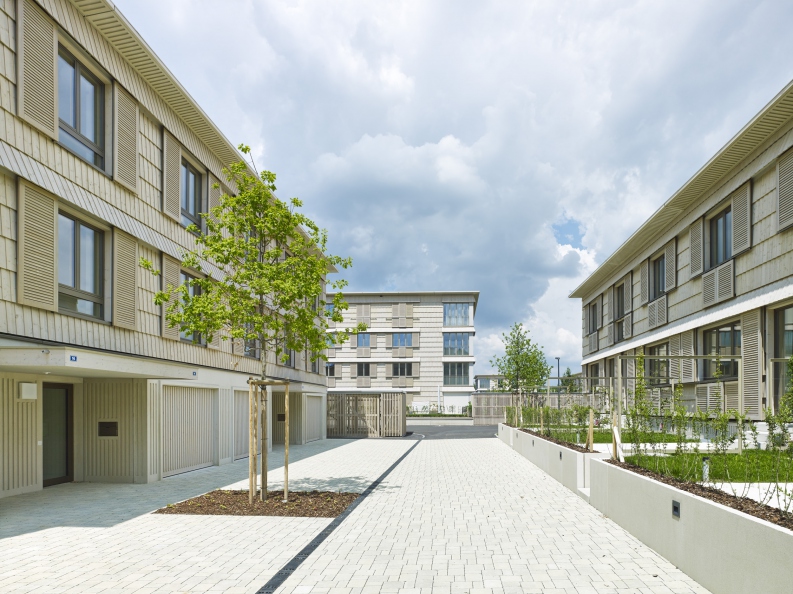 The Credit Suisse investment foundation Real Estate Switzerland has built the currently largest timber housing development in Switzerland under the name of "Neugrüen" in the small town of Mellingen an der Reuss, between Baden and Lenzburg. When it is occupied, Mellingen will have around 10% more inhabitants in one go. The topping-out ceremony for the first house in the settlement has already been celebrated.

isofloc was used in the flat roof construction for the Neugrüen housing development in Mellingen. The roof elements were prefabricated in the works and subsequently pneumatically insulated with isofloc eco using the lance blowing method. The advantage lies here in the saving of time in the element production. Compared to conventional insulating panels, it was possible to accelerate the process of element production. The work step – the insulation of the components – could thus be performed with a special work platform following loading onto the stillage.

The thermal insulation indisputably occupies a preferential position within the construction of a building. Modern thermal insulating materials must increasingly cater for the various conditions in terms of building physics. Flat roof constructions without ventilation of the water-inhibiting layer from underneath place high demands on the planner, contractor and the building materials. By installing additional thermal insulation on top of the vapour barrier / provisional covering, the temperature in the area of the outer cladding of the hollow box can be increased, thus reducing the amount of moisture inside the component. Thanks to the outstanding sorption property and moisture storage capacity of the isofloc thermal insulation, isofloc reduces the wood moisture content by up to 3 % by weight, thus increasing the building safety.

Erected in accordance with the Minergie A-ECO and Minergie P-ECO standards as well as the Greenproperty Gold quality seal, Neugrüen consists of a total of 130 apartments and 68 terraced houses. Planned by Dietrich Schwarz Architekten AG from Zurich, "healthy space for rest, development and living with an urban village character" is being created for families, commuters and senior citizens on a good three hectares of land. Renderings indicate that the characteristics mentioned are by no means empty promises and an interesting settlement worth living in may be expected. From mid-June 2013 a show house consisting of four apartments will be open for viewing. The entire Neugrüen housing development will be ready for occupancy from spring 2014 onwards.

Apartment house in Liesthal More
To overview of references

Report of the architect (German) Report "Intelligent Bauen" April 2013 (German) Details of the front (German) Rep. "Schweizer Bauwirtschaft" March 2014 (German) To the project webpage
This site uses cookies for better use. Further information can be found in our privacy policy.
I understood.