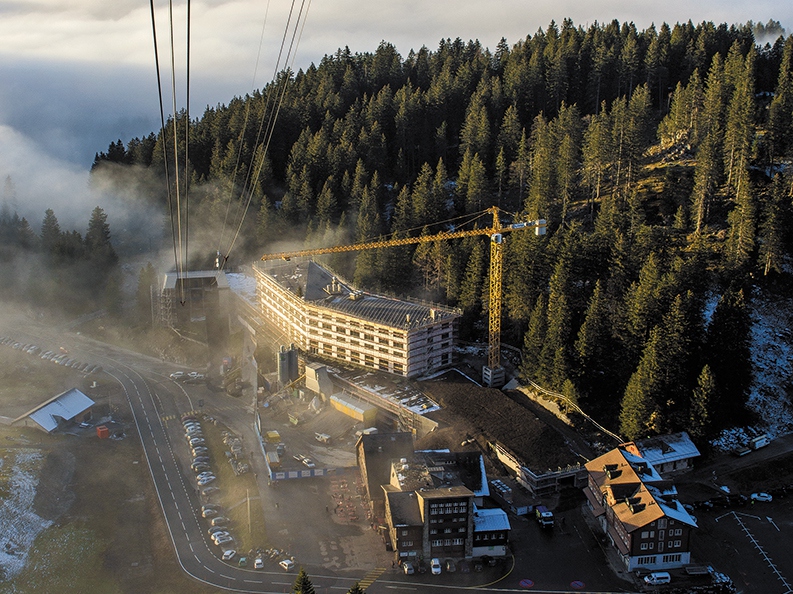 To cope with the great increase of tourism around the Säntis, the 77-year-old "Berghotel Schwägalp" was replaced by a new modern building that both meets the needs of the day-trippers and provides peace and relaxation for hotel guests and conference participants. The plan was for a building with seven stories and two building sections at an obtuse angle to each other. The new facility has a solid ground floor. This accommodates the daytime catering, a shop and a modern reception area. A mezzanine, also part of the base, includes the technical systems and an underground garage with space for 40 cars. A terrace at the front gives an unimpeded view of the landscape and the Säntis.  Lying above that and separated from the area of the day-trippers, the hotel area with 68 rooms offering 3-star and more comfort, has a finely structured wood façade which contrasts with the concrete of the lower parts, but in combination with the solid basement represents a modern interpretation of the typical local building style. The hotel complex was constructed using a reinforced concrete skeleton, with an exterior of prefabricated timber frame elements. For this new building on the Schwägalp there were several reasons not to make the roof from the originally planned in-situ concrete but from prefabricated wood elements and using blown-in cellulose insulation instead of insulation using mineral fibres: shorter construction time, smaller required storage capacity, high level of economy, significantly lower production times and efficient use of personnel.